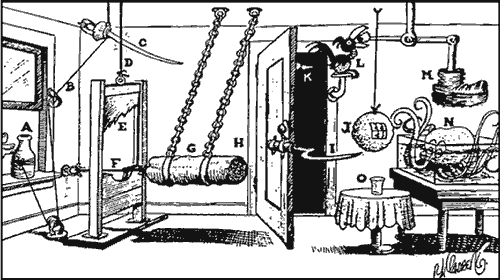 The plan had been worked out to the last detail, a masterpiece of subtlety and forethought. Rube Goldberg couldn’t have done any better.

They blew the east walls with a rocket attack, using a few missiles somebody had diverted from a shipment which had been on its way from Cambodia to the Karen rebels in Burma. These were launched from a pest-control panel truck arranged by a ladyfriend of Willie’s, a despatcher for Bug-I-Cide. Timed to go off at the same time had been both the phony police raid on the front gate of Luckyland and a display of fireworks to be launched from a schoolyard half a mile away.

As though this weren’t enough, there was to be one more diversion, this one designed to draw the local police away from the entire area for a time, giving the boys some elbow room to work. The idea had been to start a small fire in a warehouse, which warehouse happened to belong to Fat Fat, and at the same time trip burglar alarms in a couple of neighboring buildings. Tommy had set this one up. Despite his expert input, however, things got a bit out of control in the actual execution. The warehouse, a roller-skating rink, and an entire department store belonging in part to the local chief of police, though that wasn’t common knowledge, went up in flames. Nobody was killed, given the lateness of the hour; but it did for sure distract the local authorities.

The key element, of course, had been as simple as they come. Sombat and the main task force infiltrated the condominium project next door, which had only a few security guards looking after it on the night shift anyway. Then, while the fake police force stormed the front gate to distract Fat Fat’s guards, Sombat had started up the crane, gently swinging the bucket, complete with task force, high in over the walls.

The original idea had been to set the bucket down gently on the roof, whereupon Willie, Tommy, Rhot, and Hip were to have gone in through the ventilation system. The marker-pen girl, who was part of Hip’s network, had earlier smuggled fairly detailed plans of this system out with the laundry truck driver. The plan was then to hit them during the live show, depending on the element of surprise plus superior firepower to get Bia and me into the bucket and away before most of Fat Fat’s soldiers knew what was happening.

The bucket was supposed to have been dropped ever so lightly on the roof. Instead, in the dark, Sombat had misjudged by about twenty feet — after all, he hadn’t worked in awhile and he was rusty. The rest was history.

Willie and Tommy had assembled something a bit smaller than the cast of Ben Hur in putting together this caper. I had to wonder: How did they propose to pay off this army with what Mu and I were giving them?

“We earn a little bonus,” Willie tells me. “It so happens our people clean out the marks after they leave the casino. So we can forget about the extra expenses we charge you for otherwise; we take them out of our bonus instead. No problem.”

Their expenses had been pretty heavy, though. Especially since they’d been forced to slap the master plan together so fast, what with me getting snatched and nobody hearing boo from me about where I’d gotten to. But most of the crew had earned their fees, or so I heard; though there was some question about whether others should even get paid.

“We should know better than to trust that old man to look after the fireworks,” said Willie. “How does anybody sleep right through a rocket attack that way?”

“And to think Mu actually recommended him to drive the getaway car.” Hip shook his head in amazement. “Cousin or not, the old dodger could hardly stand up, much less drive. And his car was in worse shape than he was. I believe that was the oldest Benz I’ve ever seen in Thailand.”

“Wait a minute — was this car painted green, by any chance?” I asked, hardly believing it could be so. “With patches?”

You could say we’d met. This was the strangest thing. And here he was one of Mu’s cousins as well. Of course I was beginning to wonder who wasn’t; so maybe that part of it wasn’t too surprising after all.

What an operation, though. There hadn’t been a single casualty on our side, if you overlooked the geezer, who had gotten himself busted for unauthorized use of fireworks by the only cop in that part of the city who wasn’t over watching the department store burn down.

One thing still bothered me: What had made Fat Fat build that condominium right up next to Luckyland that way? In most other respects he had struck me as being kind of obsessive about security.

“With the connections he had? The cops in his pocket and everything?” Hip was giving me the you-babe-in-the-woods look again. “Fat Fat never expected anybody to try busting him.”

“So that’s why he had two walls and four front doors and crocodiles all around the joint, right?” I said, giving Hip my you-babe-in-the-woods look. “Get serious.”

“Whoa. Come on, Jack. You’ve been in Thailand for awhile. That was mostly image. Self-presentation. You can’t be somebody important if you don’t have a mobile phone and a Benz and membership in a golf club; you can’t be really important unless you’ve got bodyguards. And everybody’s got dogs and walls. So if you want to be a chao por, a godfather like Fat Fat wanted to be, you’re going to have even more walls; and it’s always a good idea to have some lasers and video cameras because that’s Hi-tech and Up-to-date. It also makes the cops look good if anything goes wrong and the public starts wondering why they are not closing down these dens of vice more often.

“Crocodiles, mind you, that was putting on airs. And the condominium itself — Fat Fat just wanted to have the biggest erection in the neighborhood. That’s all. Lucky for us, nothing would have it but he also needed the biggest crane in the world on top of it. That was dead convenient.

“And if this security stuff had any real purpose beyond showing everybody who was who and what was what, it was only to keep all the unhappy people in.”

And Hip explained how he decided to come along on the raid. First, as he told me, he had felt somewhat responsible for the whole situation — on behalf of Izzy Scoop, that is. Besides that, he was a reporter. What the hell, anyway; he had attended parties in Vietnam that made this one seem tame enough, when everything was said and done.

“But you listen to me, Jack,” he said. “Even though all this grief was meant for Izzy, it could have just as easily been meant for you. Come to that, it should’ve been meant for you, the way you carry on, a loose cannon in this Land of Smiles, here.”