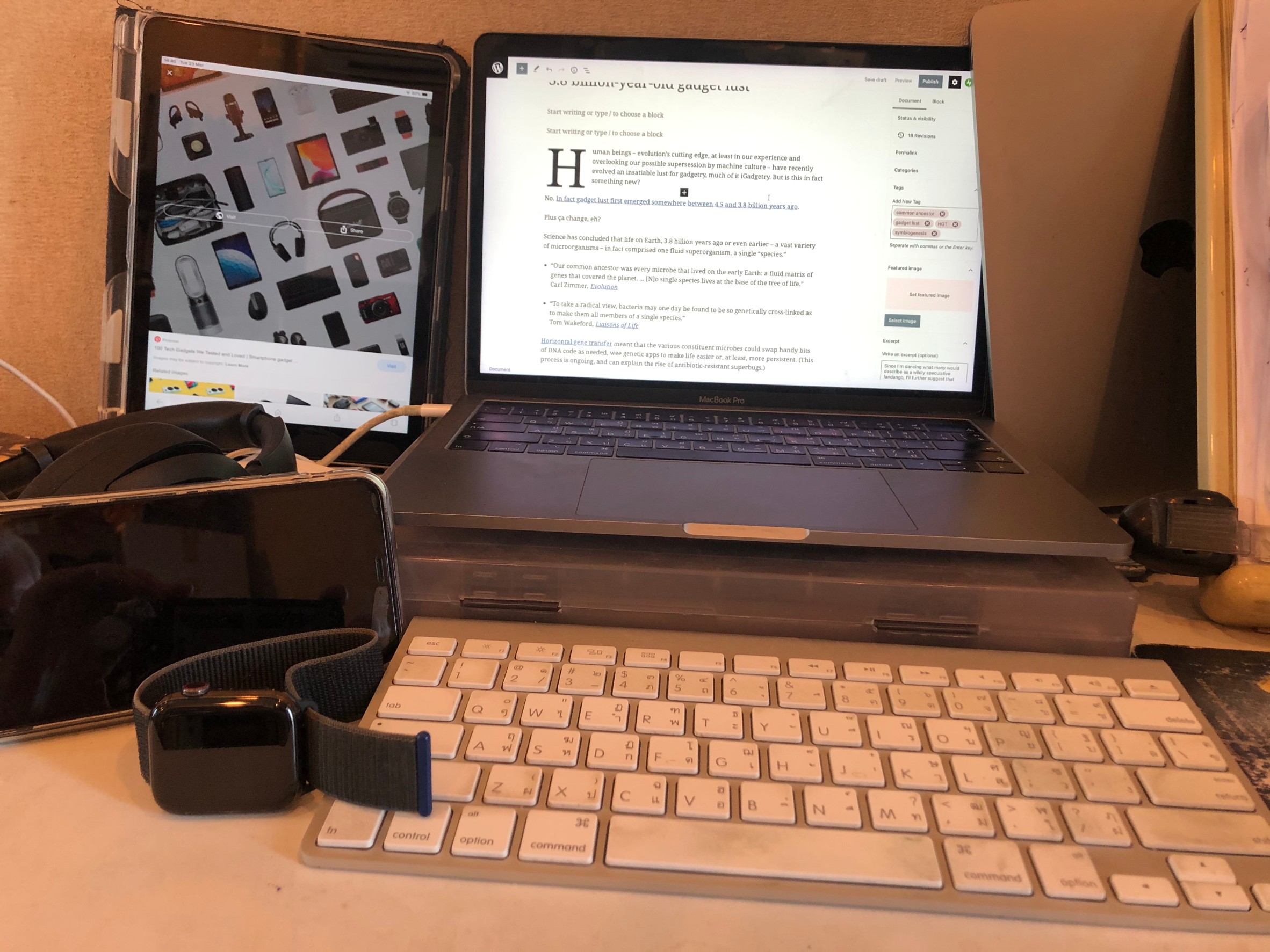 Human beings – evolution’s cutting edge, at least in our experience and overlooking our possible supersession by machine culture – have recently evolved an insatiable lust for gadgetry, much of it iGadgetry. But is this in fact something new?

No. Gadget lust first emerged somewhere between 4.5 and 3.8 billion years ago.

Science has concluded that 3.8 billion years ago or even earlier, life on Earth – a vast variety of microorganisms – in fact comprised one fluid superorganism, a single “species.”

Horizontal gene transfer meant that the various constituent microbes could swap handy bits of DNA code as needed, wee genetic apps to make life easier or, at least, more persistent. (This process is ongoing, and can explain the rise of antibiotic-resistant superbugs.)

Then, roughly 1.5 billion years ago, a process of symbiogenesis produced the eukaryotes, the cells that make up human beings and all the other “higher” lifeforms, and these have ever since incorporated and employed simpler organisms as handy gadgets.

Both mitochondria and chloroplasts originated as non-nucleated single-celled organisms that were first ingested by, or else invaded, more complex nucleated cells before entering into symbiotic relationships with their “hosts.” Mitochondria supply adenosine triphosphate (ATP) to both plant and animal cells so these can produce chemical energy from food. Chloroplasts in plants supplement this process by photosynthesizing starches and sugars as sources of energy.

And since we’re already dancing what some might describe as a wildly speculative fandango (though hard science now agrees the foregoing are the straight goods), why don’t we also all argue this suggests an evolutionary drive to energy autonomy. (I recognize, and don’t care that this proposition is tainted with teleology. Not to mention it needs much more explication.) Beyond that, we may suggest in later posts if we’re in the mood, there’s also evidence at evolution’s leading edge for a semantic, or cognitive drive to autonomy as subjective agent.

We can also ask the question: To what extent do all eukaryotes, including Homo saps, essentially remain part of the originary microbial superorganism? More on that and other related issues in later posts.

“Relax,” I reply. “Have I ever misled you before?”

I have to explain to her how a certain standard of hilarity can be interpreted as disrespectful. Plus, as I’ve suggested in an earlier post:

Maybe we don’t have to go back 4 billion or 1.5 billion years to find earlier outbreaks of gadget lust. Though to tell the truth, the following article made no sense to me.

“And exactly how is that different from the article you’ve just written?” Sara asks.