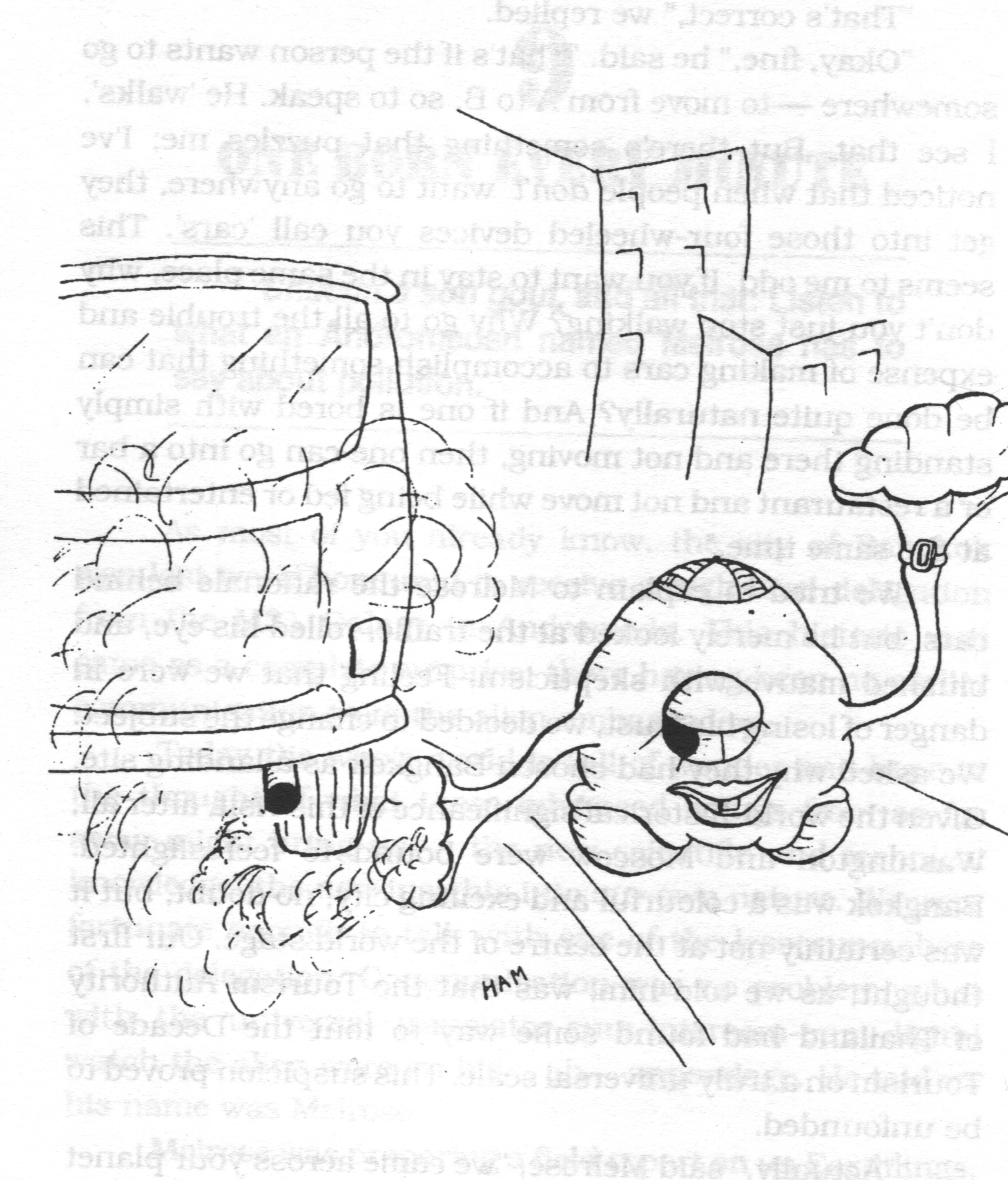 Bangkok currently lies enshrouded in a great cloud of fine particulate matter. Hey, but listen to what an Andromedan named Melrose had to say about pollution back in the 1990s, back in the days of leaded gas and black-belching city buses. Chacun à son gout, eh? The following originally appeared in the Bangkok Post Sunday section, and was later collected in Bangkok Old Hand (Bangkok: Post Books, 1993).

One born every minute

As most of you already know, the city of Bangkok was last week honoured to receive a high-level delegation from the M31 Galaxy in Andromeda. This historic visit came as a complete surprise, there having been no earlier communication from the alien ambassadors. Today the whole world is full of wonder and hope at the thought of what these advanced beings from so far away might bring us — the new scientific and technical knowledge, the new insights into our own nature. We were fortunate enough to talk with one of the lesser members of the delegation. Communication was no problem, what with the universal translator-cum-intercom-cum-digital watch the alien wore on his … appendage. He told us his name was Melrose.

Melrose was preparing a field report on us Earthlings, with a view to making a few bucks back home on a TV series called “Tell Us Another One”. He asked us if we could clarify a few points.

“Tell me,” he said, “I have noticed a very strange thing: the people in this place you call ‘Bangkok’ get around by means of bipedal motion — ‘walking’, I believe you call it.” The creature rolled to one side inquisitively as he asked this.

“Okay, fine,” he said. “That’s if the person wants to go somewhere — to move from A to B, so to speak. He ‘walks’. I see that. But there’s something that puzzles me; I’ve noticed that when people don’t want to go anywhere, they get into those four-wheeled devices you call ‘cars’. This seems to me odd. If you want to stay in the same place, why don’t you just stop walking? Why go to all the trouble and expense of making cars to accomplish something that can be done quite naturally? And if one is bored with simply standing there and not moving, then one can go into a bar or a restaurant and not move while being fed or entertained at the same time.”

We tried to explain to Melrose the rationale behind cars, but he merely looked at the traffic, rolled his eye, and blushed mauve with skepticism. Feeling that we were in danger of losing his trust, we decided to change the subject. We asked why they had chosen Bangkok as a landing site. Given the world-historical significance of this visit, after all, Washington and Moscow were bound to feel slighted. Bangkok was a colourful and exciting city, no doubt, but it was certainly not at the centre of the world stage. Our first thought, as we told him, was that the Tourism Authority of Thailand had found some way to tout the Decade of Tourism on a truly universal scale. This suspicion proved unfounded.

“Actually,” said Melrose, “we came across your planet quite by accident. Since it appeared to be a class D (habitable) world, however, we used remote sensors to determine the most benign environment for an exploratory mission. And here we are.”

Melrose extended a breathing trumpet towards a clapped-out old Isuzu bus that had pulled up beside us, and then inhaled deeply as the bus belched and banged away from the stop. “Ahh,” our extra-galactic visitor said, trumpet quivering appreciatively. “A little too much combustion, perhaps, but all in all a fine bouquet — subtle, yet substantial; proud, one might say, without being pretentious.” Melrose explained to us that his home planet had a lovely hot climate and thick black clouds of hydrocarbons all year around. Over the centuries since his species had developed space travel, they had modified the atmospheres of other planets as well, and had established flourishing colonies throughout their galaxy.

“”For a small consulting fee,” he told us, “we could do wonders for you here on Earth. For example, these things you call “city buses” are remarkably efficient at producing a desirable atmosphere; but you waste much of it by not enclosing Bangkok under a dome. Just let us bring in the force-field generators, and you’d see a difference within hours. Really, this city has such potential.”

We were about to ask Melrose if the same force field that kept the hydrocarbons in would keep the rain out, when we were interrupted by the approach of a slick-looking fellow who exuded a positive excess of goodwill. Melrose and this chap both spoke at the same time and, remarkably, said exactly the same thing: “Where you come from? You want snake farm? Buy sapphires? Rubies?”

The man looked a little shaken, and backed off, turning to hurry away out of sight along Suriwongse Road. Melrose beamed (actually he turned bright green, which for Andromedans is the same thing). “I think I’ve finally got it right — it’s such an involved greeting!”

We watched as he rolled out in front of a passing tourist lady and tried the greeting again, just for practice: “Where you come from? You want snake farm? Buy sapphires? Rubies?”

“Oh, I’m from Kansas City!” she responded. “That’s not in Kansas, you know, though everybody always thinks it is. Oh, no; it’s in Missouri. But that’s a long way from here. Are you Thai? Oh, no; you can’t be. Of course not. No, you look different. And you speak such good English. Do you have sapphires?”

We felt we were running short of time, and we hadn’t really got anywhere with our questions, as yet. We gently eased ourselves between Melrose, who was confused, and the lady from Kansas City, Missouri, and pointed the latter individual in the direction of a government-authorised jewellery shop.

Just then it started to rain, and Melrose began coughing and displaying pink and yellow stripes — obvious signs of distress. The atmosphere was rapidly becoming too thin for his metabolism, and he had to slip into his personal force-field bubble with the built-in smog generator. In no time the water was up to our ankles, as we stood there in the bus shelter. (We would have gone in somewhere off the street, but Melrose didn’t want to get too far away from the buses.)

“You could certainly use a dome over this city,” said Melrose, his voice emerging tinny and plaintive from inside the bubble. He was bobbing on the rising waters like a misshapen beachball. “Is this what you call a flood?” he asked us.

“No,” we answered. “This is not a flood. It is very wet, but you cannot describe the situation as a flood. The government announced some time ago that they have beaten the floods. There are to be no more floods.”

“I see,” said the alien, who was by now floating up around our knees. “Admirable, I’m sure,” he added, bobbing violently in the wake from a passing bus. “But what about the longer term? What about these new buildings? They have windows right down to street level. And the doors are at street level! Where is all the construction of raised travelways one would expect to see?”

Melrose had us quite confused, by this time. What, we asked in slightly more diplomatic terms, was he wittering on about?

Carbon dioxide, he informed us. Carbon dioxide in the atmosphere and the warming of the polar ice-caps. Apparently he was referring to what our scientists have called the “greenhouse effect”.

“Surely you realise what’s happening?” he went on. “Our planetary sensors and computers had it figured out before we touched down. You’ve got about 35 years at the outside, before the city of Bangkok, together with its flood-control measures, will be totally under water.”

Melrose punctuated this rather alarming pronouncement by spinning on his axis with a flourish of breathing trumpets. “The proportion of CO2in the atmosphere is increasing, and your climate is getting correspondingly hotter. We assume you Earthlings are engineering this planetary modification by means of hydrocarbon emissions together with the systematic extermination of the forests. In fact, we have admired how effective the programme has been, given your primitive technology. However, the ice-caps are melting, and in just a few decades sea levels worldwide will rise by several feet. Not much, really, but enough to completely submerge your charming city.

“I am surprised you haven’t noticed the danger. Of course you can confidently expect lovely hot weather and gorgeous billowing clouds of hydrocarbons, the way things are going; but you people must be alert to the secondary consequences and take appropriate measures now.”

To say that we were taken aback would have been an understatement. This was indeed bad news — bad news (the submersion of Bangkok) unleavened by what Melrose felt was the good news (hotter weather and more hydrocarbons).

As we are sure the reader already knows, however, we are saved. The arrival of our Andromedan friends has proven providential in the extreme. Discussions between ranking members of the Andromedan delegation and our government have produced agreements of untold potential benefit to both our species. The key to the trade agreement is a force-field generating station the Andromedans have promised to set up within the decade.

For their part, the aliens will receive regular shipments of Bangkok air. Initially, there will be three premium vintages: “Phya Thai Monday Morning”, “Rama I Friday Evening” and, for the real connoisseur, “End-of-March Payday”. Given what they feel will be the extraordinarily rare quality of the atmosphere in Bangkok after establishment of the force-field dome, the Andromedans reckon they’re getting the best of the deal.

Our government, meanwhile, is also more than satisfied. The dome will keep the rains off Bangkok, simplifying the question of flood control. At the same time, there is to be a public information campaign revealing how our leaders plan to tackle the problem of air pollution. This scheme, as you have seen, is brilliant in its simplicity, and self-financing besides: We will bottle the pollution and export it to the Andromeda Galaxy. What could be more elegant a solution?

And, finally, Bangkok will be protected from the rising seas. Eventually, it appears, the whole city will be encapsulated in a submarine force-field. The Tourism Authority sees this as a heaven-sent opportunity, and is already preparing to advertise Bangkok as the biggest marine aquarium in the world, if not the entire solar system.

There on the street with us, Melrose received a radio message from a colleague. He’d left his universal translation device switched on. “Melrose! Melrose!” came the excited voice. “Get yourself on over here to the corner of Phya Thai and Rama I. You’re not going to believe it. An atmosphere fit for kings. For emperors!”

“Oh, man; it’s incredible,” the intercom squawked. “You’ve gotta see it to believe it —  all these weird Earthlings sitting motionless in their cars breathing this elixir through filters and refrigeration units! It’s like sucking a wringbinder through a snodgap. Whackos, the lot of them. And Melrose..?”

“They’ve agreed to trade their air away for one — are you ready for this? — for one force-field generating station.”

Too late, he saw that his translator had been on during the whole exchange. He turned blue with what we’d like to think was embarrassment, made his excuses, and rolled off at a rate of knots. 5 thoughts on “One born every minute: Wherein Melrose rips Bangkok right off”