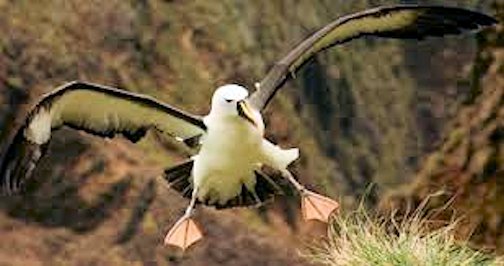 The noted etymologist J.B.S. Haldane, perhaps more of a wag than most of his ilk, famously suggested that “The Creator, if He exists, has an inordinate fondness for beetles.” So I noted in an earlier post (Japanieces, tilefish and things ).

Now we can add the following to our list of God’s attributes. We also have good reason to believe He laughs at gooney birds. Some commentators prefer to suggest He laughs with them, seeing as how He created them, and it isn’t their fault, or something, and, according to researchers, their typical landings and takeoffs are related to the birds’ chronic insomnia.

Be that as it may, in these troubled times an increasing number of friends and acquaintances complain of insomnia. Most of them, untroubled by awkward landings, find plenty else to bitch about. Hey. If we needed a new conspiracy theory, we could blame it all (except for the gooney birds) on N. Korean intelligence, or maybe Antifa.

Something from a story I’m working on

The insomnia is killing him. For ten nights running, to little avail, Joey One took a sleeping pill. Last night, the eleventh night, he went cold turkey only to lie awake nearly the whole night. This morning his nerve endings protrude, freshly exposed to life in all its complex and unrelenting fucked-uppedness.

Homo sapiens has evolved any number of dysfunctional features, including a design flaw that leads an estimated 1 billion people, nearly 13 percent of the global population, to develop debilitating sleep apnea.

Add to that ‘restless leg syndrome,’ nocturia, the lusty snores of sleeping companions, and just plain neurosis, including anxiety related to the fear you’re going to suffer from insomnia. So now how many of us suffer from sleeplessness?

And if we limit our investigation to creative writers, that number is likely much higher.

Add insomnia to our list of writerly occupational hazards

In December 1912 Kafka noted, with his usual tortured specificity: “The need for sleep rolls around in my head, tensions in the upper part of my skull on both sides.” Taken as a whole, his writings suggest that insomnia, as an image of unremitting consciousness, may be the most characteristic malaise of the modern writer, especially in his fear of a world increasingly marked by violence, chaos, and death. “Perhaps my insomnia only conceals a great fear of death,” he told his friend Gustav Janouch. “Perhaps I am afraid that the soul—which in sleep leaves me—will never return.” … For Fitzgerald, suffering his own creative and personal decline, insomnia had been the first signal of a general breakdown. His 1934 essay, “Sleeping & Waking,” suggested that all his misfortunes had begun two years earlier, with the author’s nocturnal battle with a pesky mosquito in a New York hotel room. After that he became “sleep-conscious” and transformed his preparation for bed—a night-cap, some light reading, the bedside table arranged just so—into the kind of supersitious ritual familiar to most insomniacs. But these jocular anecdotes give way to an affecting portrait of the insomniac’s dire anguish: “The horror has come now like a storm—what if this night prefigured the night after death— what if all thereafter was an eternal quivering on the edge of an abyss, with everything base and vicious in oneself urging one forward and the baseness and viciousness of the world just ahead. No choice, no road, no hope—only the endless repetition of the sordid and the semi-tragic.”

On the Edge of an Abyss: The Writer as Insomniac, by Greg Johnson

Think about that. And I wish you a sound, fully restorative sleep tonight.

Don’t worry, with Fitzgerald, about your soul quivering on the precipice or, Kafka’s fear, taking a leave of absence to go walkabout, Tibetan Buddhism offers practical advice for negotiating the bardo .