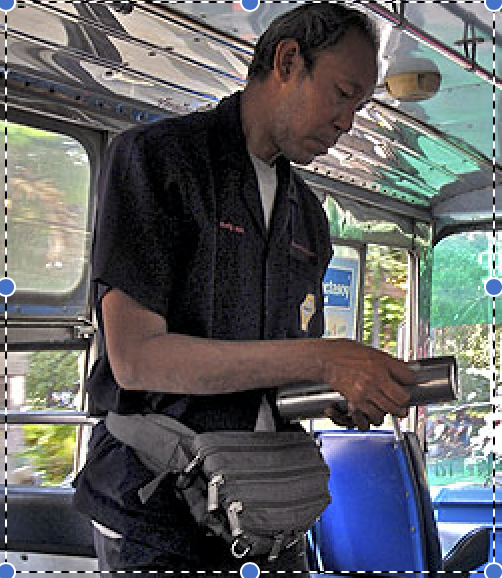 Last week Jack returned home after having his best pipe and his typewriter all shot up, and drank too much with some of Mu’s relatives, bisnet associates and assorted hangers-on.  This week he cures his hangover en route to Shaky Jake’s in search of expert advice regarding his current situation.

Standing in front of me on the bus there was a proper young Thai lady. She was doing a good job of filling a T-shirt that read I EAT PUSSY. Under this legend was painted a couple of fat red lips with a fuzzy pink kitten’s tail dangling out from between them. This lady didn’t know a lot of English, was my guess.

I had a sick hangover. A sticky thick sheen of sweat covered me, refusing to evaporate in the muggy closeness. I was standing on this old Isuzu bus, a wooden-floored relic of the pre-boom days, everything shaking and banging as we rocketed along in the bus lane, farting great blasts of black smoke in our wake, the driver under the misapprehension he was Jackie Stewart and this was a Lotus he was driving. He was horsing the Isuzu along, alternately standing on the accelerator and then on the brake. And, just in case I was not uncomfortable enough already, he had some loud pop music on his tapedeck. We lurched back and forth and bounced up and down, packed in there like refugees, the Thais smiling at one another for some reason. Probably they had heard this was the Land of Smiles and, being conventional folk, they figured it was best to smile.

I was not smiling. I was too tall to see out the windows, and it was too crowded for me to crouch down to where I could peer out, so I could only guess at where I was. I crooked my neck slightly to avoid banging the ceiling and hand-rails with my head, which meant I was constantly getting a faceful of hair from the girl with the interesting T-shirt standing in front of me.

Sweat was oozing out all over me. The traffic fumes were unbelievable; I was breathing as shallowly as I could without passing out from lack of air. My head was throbbing. Why was it I never learned? Thai waiters kept your Mekhong topped up; you could never drink the glass down to the half-way mark before they were sneaking up behind you and slipping your glass away for a refill. A good waiter could do this so you never noticed; you just kept drinking and talking and thinking everything was okay until you tried to stand up.

I found I was a little on edge. To start with, as I said before, I had spent the night before drinking Mekhong with cousin Sombat and Dok the transvestite. Then I was awakened at daybreak by the flower children testing the Isarn flutes they were taking to the market to sell this day. This caused me to blow up at the whole assembly, which in turn had the effect of inciting Granny, who immediately took to hollering “Arai na? What?” in querulous tones and thereby putting everybody in a bad mood. Especially Mu was not happy; I was still not behaving like a proper Thai.

Nobody could behave like a proper Thai in this heat with a hangover, or so I was telling myself.

The ticket-taker, an unhappy individual with an eighteen-inch metal cylinder full of coins and paper ticket-rolls, was squeezing his way through the passengers. He was snapping the lid of his cylinder open and shut so that it chattered like a set of joke dentures. I guessed somebody had to do the job, but why did he have to do it when I had this hangover? Then I felt a prod in my rib-cage and there was a sudden metallic snap-snap-snapping right under my nose. This caused me to swear horribly more or less under my breath and hand the guy two one-baht coins.

“You like to live dangerously, don’t you?” I told him in English, smiling like a outlaw; this was the Land of Smiles, after all, and I should behave like a Thai.

We had been going along for some time already, and the bus was not stopping as often as you might have thought it should. I was getting the idea we were close to where I wanted to get off, but I couldn’t see anything until I took advantage of a sudden lurch, shoving a few people down the way with my butt and performing a heroic kind of contortion so I could catch a glimpse of the street. “Holy shit,” I said, and the girl with the pussy shirt smiled at me. We had just gone by my stop, however, and I didn’t smile back.

With some amount of pushing and swearing and saying “Excuse me; kaw thoht, krap, Jesus Christ” I managed to get to the rear exit, where I stood down on the step and rang the little bell. I rang it and I rang it as we shot by the next stop as well. Sometimes Bangkok bus drivers do this — they get on a run, the traffic eases off for some reason, and maybe their bus is full anyway, so they don’t stop. They don’t stop to let people on and they don’t stop to let them off. If you were in the right mood, you shook your head and you smiled ruefully, thinking “This is Bangkok; and this is a Bangkok bus driver.” That was if you were in the right mood. Instead I tried smashing on the door frame with my fist, which had the effect of fucking up my hand and not stopping the bus.

The ticket taker came over to stand beside me, and he grinned at me. Possibly he was smiling, but I saw it as a grin, and I was not, as it happened, in the mood to shake my head and smile ruefully. What I did instead was I grabbed his change cylinder which, being chock full of change, was heavier than you might have thought, and I heaved it out into the road, cursing foully and by no means under my breath.

This surprised the ticket-taker somewhat. It surprised me too, come to that. But it had an immediate and gratifying effect — the cylinder exploded in a shower of money flying and rolling every which way, while the ticket-taker started screaming and blowing his whistle and, I was pretty sure, calling me a giant lizard, though my Thai wasn’t that good. Best of all, the bus screeched to a halt, which was what my plan was in the first place; so I jumped out and took a powder. Before I disappeared up a side-street, moving like the wind, I had a glimpse of the driver piling off the front of the bus, shirt open, tattoos everywhere, a knobbed club in one hand, and I got the impression that this individual was disturbed about something. It could be that he and his ticket-taking associate would have liked to discuss matters with me, but I was already behind schedule and I had no time to hang around yapping. Besides, they had some work to do re-collecting their fares. I loped up the road and then took a detour through a market. Nobody paid much attention to me, since in this part of town they were used to seeing farangs, and farangs were often found doing silly things in the midday sun. Pretty soon I made myself scarce enough I could stop to catch my breath.

At first I swore some more, but then I started to laugh. This was not a typical thing I had done, just then; I was not the type to go around making a display of myself and causing people this kind of aggravation. But I was feeling better than I had since I woke up, and it seemed to have something to do with stopping the bus in this novel and dramatic way. Or maybe it was only all the running, I told myself. That must have been it. I made a mental note to get more exercise.

Though what I really wanted was a cigarette.

I walked the rest of the way to Shaky Jake’s.

Plus Jack reveals some challenges he faces in this life.

2 thoughts on “ONE WAY TO CURE A HANGOVER”