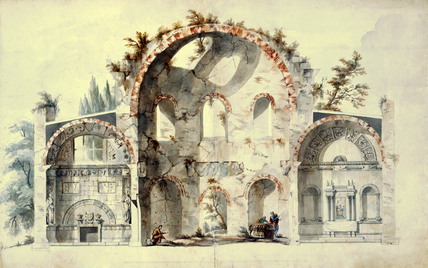 Adopt a new writing program? Sure. Classic avoidance behavior, combined with the “let’s buy a new guitar because the old one doesn’t work” syndrome. Or was Scrivener something my writing project direly needed? Could this be the Rx for godwotterous writerly brain syndrome? I’ve been thinking about the plasticity of the brain, and the notion that everyone from musicians to London taxi drivers grow relevant volumes of brain—in some cases, I’m going to imagine, positively Schwartzeneggerian neural structures—to cope with what they need to know and do. I’ve also been thinking about the way my speculative series has been going (call it science fiction if you must), and I fear my own brain is evolving in parallel with the novels.

My question: Might my brain be starting to resemble what the Brits describe as an architectural folly? That’s right. Mirroring the trilogy, it could be effectively growing turrets, niches full of neo-classical statuary, ramparts and doodahs on all sides, probably surrounded by a godwotterous garden in which you could lose an army. What kind of writerly Muse would want to live in a joint like that, eh? I have another question, one perhaps best addressed to a psychiatrist. What happens when—supposing I finish it—this unlikely novelistic epic succeeds? Will the neural scaffolding then remain, a rambling, ramshackle folly standing in a garden full of grottos and gazebos and arbors and obelisks? Not to mention pink flamingoes and gnomes? Christ. What will I be able to do with a brain like that? Except maybe embark on another series of novels. The horror, eh? Given the number of digital and hard-copy files, and notes and working drafts that have accumulated over the years as I scribbled bits in the interstices between bread-and-butter gigs as a writer/editor, even my freakishly refashioned mind would have to fold at the thought of making sense of it all. (Better, perhaps, I simply burn the lot of it and set out afresh.)

Except that I’ve been given new hope. I’m now working in a program called Scrivener, which I heartily recommend to writers and researchers everywhere.https://www.cloudwards.net/best-writing-software/

I’ve long resisted the idea of having software programmers decide they know better than I do how to proceed. But Scrivener doesn’t work that way. It has itself evolved over the past few years in light of feedback from working wordsmiths, and it’s an entirely unobtrusive, unpresumptuous, endlessly flexible godsend. It works. Magnificently, it works.

Here’s a link to a review that helped swing me.

I’m not even getting a commission.

Here’s a compendium of useful writing tools:
Best Writing Software 2019: Quill & Ink for the New Ag ( from Cloudwards)
The only program on this list that I’ve used is Scrivener. I believe it’s less intrusive than the others — I’d rather trust my own judgment when it comes to spinning readable prose. Having said that, those who are less experienced (or less cocky) may up their game by using the other programs as in-house writing tutors.